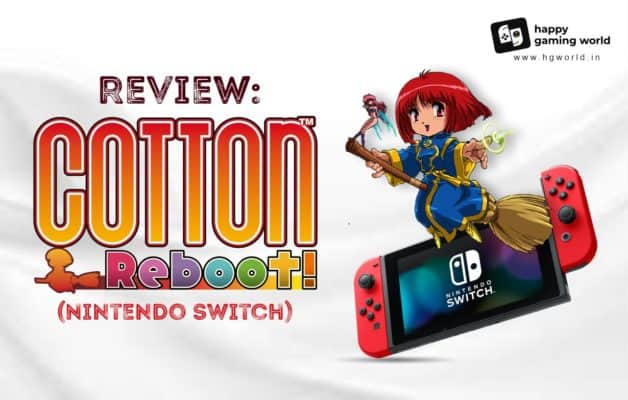 Success’s Cotton and I go way back. While, writing this Cotton Reboot Review, I remember the time when I played the same on my then PlayStation 3 and jumping hoops while sipping on my Rasna.

This old gem was quite the cult classic back in the days with breaking records after records in Japan. Soon it gained much-deserved recognition all across the globe and gamers considered Cotton to be one happy, simple and fun shoot em up game.

When the studios announced the remake- Cotton Reboot, I was beyond ecstatic. What can I say, I am a sucker for retro and nostalgic video games. So, I decided to play the same and bring to you this Cotton Reboot Review.

After playing this gem I can assure you that the studios combined the old elements of the original game with some refreshing new layouts and characters to create a perfect blend of entertainment and fun. The studios did a fantastic job in creating a game that guarantees a great experience.

Anyone playing the game for the first time could mistake it for a simple shmup game because of its silly and colourful visuals. However, it is quite the opposite. Much like the old games, this game too requires equal opportunities for experimentation as to what should be your gameplay or how to completely control your playable character. This also includes your playable characters’ movements, their attacks, their defence moves and also the attacks of their fairy friends.

The game is very intricately designed to render a deep and wholesome experience to the player irrespective of their age. There are so many actions and attacks that you can use against your foes. These range from simple straight shots to complex and deadly spells that are colour oriented and can be levelled up. The game has a lot to offer and once you get a good grasp on how things work there, the gameplay will favour you and improve your experience with the game.

Just in case you need a plot or story to get started, we got you. The world is plunged into deep darkness as evil demons have captured light and are crawling every inch, spreading chaos and sadness. With little to do to help the world, Silk a character decides to lure Cotton a very powerful witch into helping her fight the dark forces in return for some candies.

Talking about Cotton, she is not your regular protagonist who is driven to save the world due to some injustice or anything done against her. She turns a deaf ear to all the chaos that is happening around and only enters the battlefield when Silk convinces her and bribes her with Willow, her favourite candy.

Though, a scanty plotline, the backstory and the personalities of our characters are enough to ignore the simplicity of it. The plot is represented in the form of some animated brief scenes and cut-scenes in between levels with some Japanese voice acting that makes Cotton’s annoying antics bearable.

Pave your way up:

Like every other game, you are the one who has to level up in order to gain the benefits of upgrades. You start with basic straight shooters that are okay to defeat your land monsters. However, as you start to level up you see significant changes or rather, I should say improvements to both your fighting options and movements. Not only yours but even Silk’s actions and movements improve with every single level up.

Soon after worming your way through a few levels, you will be thrilled to see the effects of your spell defeating dragons and monsters alike. Soon the intensity of your attacks fills the screen with cool rays of electricity and meteors making you proud of your attacks.

You will also notice that sometimes (or rather a lot of times in my case), you wouldn’t be able to keep an eye on every single small detail on the screen that includes some deadly attacks from enemies behind or below you. The reason is there is so much going on all at once on the screen that it becomes hard to notice and decipher everything. For example, in one of the levels, I died not knowing what killed me or from which direction the attack came.

The game is very intense and requires quite some thinking and trial and error in order to overcome some challenges in the game.

The original game was an arcade game. However, this one created for our consoles has a save button within the countdown that lets you jump to a certain point rather than starting the game from the beginning. Which according to me is cool as compared to the original arcade format. I mean we aren’t missing much other than setting the high scores.

The creatures or the monster as they can be called are worth mentioning since they form a major part of the game and its story. The enemies in this game aren’t the ones to take likely as they are in plenty and recurring. The evil bosses are not to be taken lightly as they have an annoyingly unpredictable pattern of movements and attacks that will make you flip your television sometimes.

Comparison with the older version:

Having played both, I must say that this new reboot version is better than the original version, it includes better resolution running smoothly and faster. There are also far more details and actions happening on the screen that will make it quite noticeable and different from its predecessor.

You can test the same out for yourself, as Cotton Reboot comes with a faithful remastered version of the original game renamed X68000. The game is quite something itself with all the necessary fun elements that created history in Japan a few decades back. It might also suit some people who are looking to have a fun time with fewer obstacles. The remastered game also has two specific score modes of 2 and 5 minutes that let you go on a surviving/shooting spree.

The game is absolutely stunning with its retro Halloween themed visuals and is assured to match your nostalgic vibes. The game is neither too easy nor too hard if you concentrate and strategise enough. The lively colours and music with the animated Japanese voice-over add to the overall charm of the game.

However, I felt like the game was shorter than expected. The game can be finished in one hour max, which makes it kinda unfair given the price of the same.

If you keep that aside that game is quite intricately designed with a rewarding gameplay system equipped with amazing and imaginative monsters and levels.

That’s all from us. I had a great time writing this Cotton Reboot review. We hope you found this entertaining and informative. We at HGWorld are aimed to share the wonders and happiness of gaming with others. We buy, sell, repair and trade everything related to gaming and gaming products. Head over to our website to avail of amazing discounts and offers on your favourite gaming accessory. Happy gaming!

Watch the video of PS5 here.