All about PlayStation 5: Models, Specs, Price in India 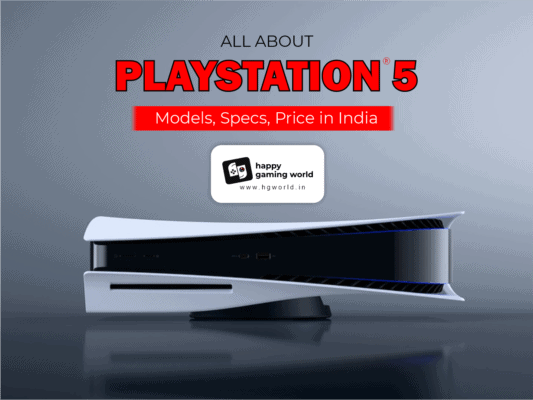 The all-new PlayStation 5 is the talk of the town for all the right reasons. This young star is nowhere the same in comparison to its predecessors, both in terms of features and looks.

The new PlayStation is equipped with a custom AMD Radeon RDNA 2-based GPU that is capable of exerting raw graphical power of 100.8 teraflops and also with a customed eight-core AMD Zen 2 CPU. The PlayStation console can use variable frequencies not only on its CPU but also its GPU, which means it can help the graphics to run faster and more effectively than the normal speed when the CPU is not running at its peak.

Also, the SSD is superior and unmatched. It gives 825GB of storage and 5.5GB/s of throughput, which gives the games developers the freedom to build as many complex levels as they wish without worrying much about the load time. It masks the loading somewhere out of sight in the background.

The load time of the new PS5 is so impressive, it cuts down the leading time of the PS4 by half. For example: for the game, Death Standing the average loading time on the PS4 is 1 minute and 52 seconds whereas the PS5 can load the same games under 56 seconds. Another example of the game Genshin Impact, loads under 3 mins in a PS4 whereas the PS5 can run it under a minute. Impressive isn’t it?

However, around 20 per cent of the space is occupied by the console’s system and the rest is up to the gamer to use.

The console pair well with an HDR display, 4K and 8K TV setup. It also supports 3D audio (3D audio headphones recommended). The sound and music will be assured to give you an experience never seen before.

The new PS5 is the perfect gaming partner for all your gaming adventures. Go on a quest of your own with the realistic graphics of the PS5 games supported by the console.

The price of the PS5 Blu-ray console is RS 66500 (Prices are subject to change) with a free one-year warranty exclusively on our website HG World. Apart from PS5, we also sell other gaming accessories that will help enhance your overall experience. PS5 games to a headphone that will blow your mind away, we have it all. Not only the PlayStation, but we also offer video games like the Xbox, Nintendo and others. The video game price is smashing with the try and pay specialty our company sports. Check our products today!