All about Sony PlayStation, from PS1 to PS5 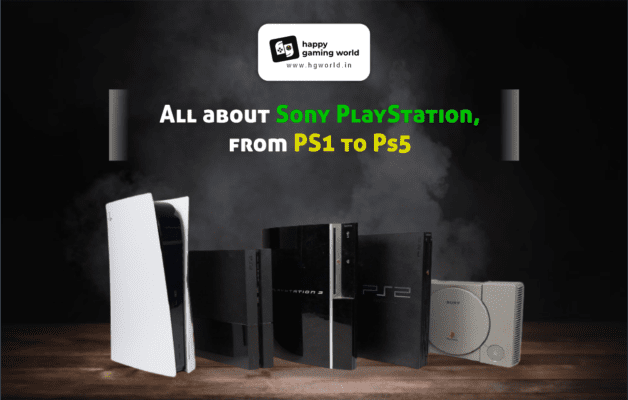 We have been knowing and using items from the PlayStation brand since 1994, and from PS1 to PS5, it has been quite a successful ride. However, before taking the drive to memory lane and know some historical facts about Sony games, let us get engaged in an interesting story that gave birth to these Sony.

Nintendo PlayStation was supposed to be the collaboration of Nintendo and Sony back in 1988. However, for some reasons still unknown, Nintendo backed off from this deal and tried to go ahead with Phillips, which was a substantial Sony competitor. Nevertheless, this betrayal inspired Sony, and they announced their first PlayStation in 1991.

Launched in 1994, over 104 million units of the first PlayStation (PS1) were sold to the date. The holding capacity of PS1 was up to 660 MB, which was much higher than the SNES Cartridge or N64. This is the reason that Final Fantasy VII was moved from N64 to PS1, and became the grand commercial success of Sony games. In 2018, PlayStation Classic was released to fit in the trend of “mini” consoles, and in 2000, Sony released a much cheaper and compact version with lesser games, i.e, PSOne. Favourite games from PS1 include Metal Gear Solid, Crash Bandicoot, Tomb Raider, Resident Evil 2, Twisted Metal 2, Parasite Eve, and Syphon Filter.

With the release of PS2 in 2000, Sony proved to be the solid force in this industry, beating major competitors like Nintendo and Microsoft, and selling more than 155 million units. Having the cheapest DVD player when released, PS2 was the next generation gaming console which also allowed us to watch movies. Sony released the PS2 slim in 2004 with networking ports on the console itself to expand its online support. With the immersion of rhythm games such as Guitar Hero or SingStar, people started spending on its accessories also like microphones, electric guitars, etc. Some games released on the PS2 were Grand Theft Auto: San Andreas, Final Fantasy X, Metal Gear Solid 2: Sons of Liberty, Kingdom Hearts, God of War.

Sony launched PS3 in 2006, which was the most expensive of that era, costing $499 for 20GB and $599 for 60GB for the newly introduced Blu-ray format. This console was highly criticized initially for the high price and poor quality of some games, however, it was developed eventually. It was a step ahead of PS2 in terms of online support, and customers were offered PlayStation Plus subscription service and PlayStation Store, PlayStation home, etc. PlayStation Network and the trophy system were introduced in 2006 and 2008 respectively for the players to connect with each other and play online multiplayer games. Games on PS3 include The Last of Us, Uncharted 3: Drake’s Deception, Resistance: Fall of Man, Demon’s Souls.

PS4, launched in 2013 was better in every aspect, be it online support or system architecture; as PS3 was the hard-learned lesson. Sony launched its first virtual reality with PS4, also providing a PSVR headset. Sony PlayStation Now came into the market in 2014 with cloud-based streaming to let customers play not only new games but also all the games of older generations. PS4 Pro, also known as “Neo” was released in 2016 improving some of the very features. Some of the games that were released for PS4 were Marvel’s Spider-Man, God of War, Horizon Zero Dawn, Final Fantasy VII Remake, Persona 5, Ghost of Tsushima.

PS5, launched in November 2020 is welcomed worldwide with the records of sales. The reviews developers have throughout the world are that they are experiencing comfort and easiness like never before. Additionally, a custom 3D audio chip is brought by PS5, which is very unique for individuals, as audio is calculated based on-ear and head shape. While PSVR can still be connected to this console, it has brought its companion with PSVR2, as Sony does not fail us to surprise every time it brings something new and unique.

We at HG World deal with all kinds of video games, gaming accessories, consoles and much more. Contact us today.