Add these PS5 games to your cart 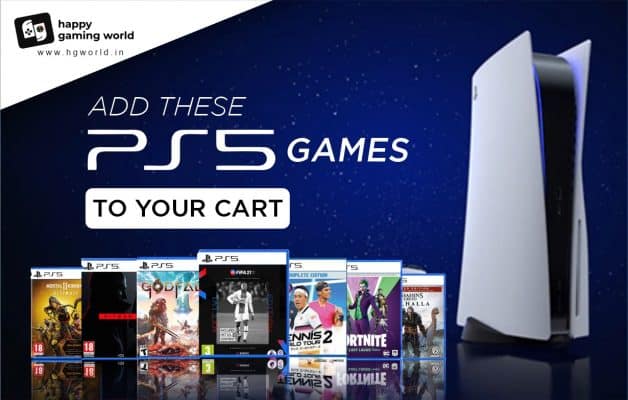 Sony made a huge comeback last year with its much-awaited   PlayStation 5. With the launch of the next-gen console, gamers eagerly waited to experience what this console had to offer. What better way than to play some exciting PS5 games on the same.

There are plenty of games that can be played on the PS5 that includes some older PS4 games, newly released games and PS5 exclusives. However, going through all of them and choosing something that may or may not suit your gaming taste, can be pretty challenging.

So, we are back to your rescue.

This list has something for everyone. From family fun adventures to first-person shooting thrillers, this list exists to satiate all your gaming needs.

Also, all these PS5 games are tested (enjoyed) by all the gaming enthusiasts in our team. And are highly recommended for you to try and buy as well.

List of PS5 games that need to be in your library as soon as possible:

The first game on the list is for everyone in the family to enjoy and get excited over. This game is pre-installed in a lot of PlayStation versions. Now, this says a lot about the popularity and reliability of this game.

This game follows around a small and cute robot as they travel and go on an adventure in different worlds. This robot is from PSVR’s Astro Bot Rescue Mission and gives you a very happy and go to feel. This positive and friendly game explore different features of the new console including the DualSense Controllers that Sony has been so much proud of.

Astro tries on different suits in a different world that highlight various features of the new generation controller. For example, the monkey suit lets the player explore the adaptive triggers on the controllers. The game is full of PlayStation history and will definitely leave you with a smile and warm feeling.

This game celebrates and brings Nordic folklore to anyone who wishes to experience the wonder of that era. Assassin Creed Valhalla is the 12th instalment in the series and uncovers an untouched area, 873 AD. The Vikings invasion of the British empire is specifically highlighted here.

Our protagonist, the Viking clan leader Eivor is a very interesting and amazing character to play. Eivor finds themselves amidst the fight between the Brotherhood of Assassins and the Templar.

Eivor then enters the Anglo-Saxon region and fights with all their might. What makes the game even more fun and adventurous is the huge and diverse collection of weaponry, fighting gears, and so much more. Eivor is presented with the opportunity of upping and improving their skills and abilities throughout the game.

The game consists of completing several missions, battles and other optional missions. The players can also return to the main area, where they can rest and know more about the English and Viking culture.

Overall, this game is completely action-packed with stunning visuals to match up the hype around the Assassin Creed’s series.

Now, this needs no introduction, however, let us convince you more as to what this game can do and why it should be in your cart as soon as possible.

Call of Duty returns with this power-packed installation the Black Ops Cold War. Many reviewers of this explosive game have noted that playing this game gave them an experience similar to watching a high budget Hollywood action movie. Now that definitely says something about the game.

This single-player game revolves around exploring the Cold War of the 80s. The story of the game begins with a group of agents being assigned to follow two individuals that were involved in the Iran hostage crisis. However, later it is discovered that someone named ‘Perseus’ was responsible for the much-known crisis. So, the president decides to form a special op force to capture this individual. Our playable character named ‘Bell’ is among the special task force.

This shooter game will want you to showcase your fabulous gunplay and combat skills. No doubt, Call of Duty: Black Ops Cold War has one of the most gripping storylines in the series.

Another power-packed installation of Marvel’s Spider-Man series follows Miles Morales another teenager who is bitten by a genetically engineered spider. Rings a bell? Yes, very similar to Peter Parker. And just like him, our protagonist Miles also develops and gains powers similar to those of our resident superhero Spiderman.

As the story continues, it is seen that Miles is still getting accustomed to their new life as a superhero. However, for some reason, Peter Parker had to move overseas and our player is left alone to protect and save the city.

Miles is seen facing so many super-strong villains including the Rhino, the Underworld, The Tinkerer and much more alone.

With stunning visuals, super moves and fun missions, this installation can easily pass as the best super-hero PS5 game of the year.

Straight from the SIE Japan Studios and Bluepoint Games, Demon’s Soul is a fantastic remake of one of the most challenging and beautiful game titles in the entire PS5 games series.

This PS5 exclusive is known to be a very alluring game with its compelling and tough battles, satisfying moments and so much more.

The storyline involves a fantasy world named Boletaria. This bleak world was attacked by a very powerful being famously known as the Old One. With this, the entire world was covered in deep fog and almost entirely consumed by the powerful being. Even though it was completely destroyed, Old One was put into sleep, thus the world is saved. However, this didn’t last long as the Old One was awoken from its sleep. The players enter the world with the intent to save it and defeat the powerful villain.

The game is worthy to be in your cart due to its out of the world graphics and visuals coupled with a compelling storyline and interesting action options.

Honestly, we can assure you that every single game mentioned in the above list has something to excite and satiate every gamer. Also, these are just a few games that you can blindly put your faith in for an amazing gaming experience.

There are also a lot of upcoming PS5 games that are worth looking forward to. To know more about them, visit our website HG World, where we post such informative blogs and articles daily to keep you updated. So, what are you waiting for come meet us!