PS5 vs Xbox Series X. Which one is in more demand? 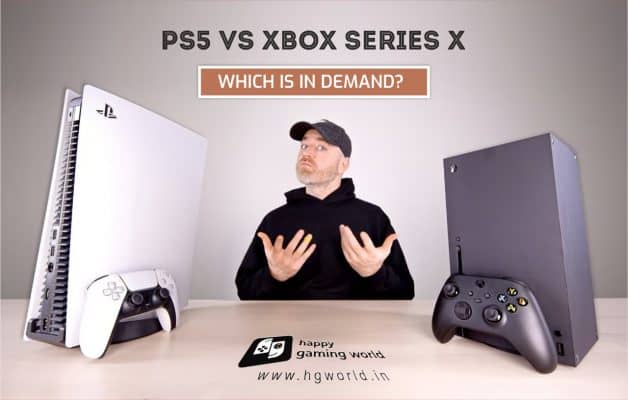 2020 gave us a look into the future of the gaming industry with the launch of Sony’s PlayStation 5 and Microsoft Xbox Series X. But which one is winning the market? Or which one should you buy? Read about PS5 vs Xbox series X to find out more.

Since its launch in November last year, getting hands-on either one has proved to be quite challenging. The Covid situation coupled with the global shortage of semiconductors that are essential in the building of these consoles has led to such an intense shortage. While the shortage is expected to continue in the near future, you can buy one today at HG World. Click here to know more.

In such a situation, gaming enthusiasts had to make a difficult decision of buying either one of them, i.e., if they found any available. So, comparing the two seemed the most natural thing and thus began, PS5 vs Xbox series X.

From real-life advanced features to exclusive games, both the companies are pulling all stops to outshine the other. You will get to hear a new update or an announcement regarding a feature or a new game or exciting subscription offers, every other week from them. Well, both the consoles are very much capable of delivering you an out of the world experience with their 4K gaming capacity, faster than ever load time, visuals with 120 frames per second and so much more.

Both the consoles have been continuously judged and assessed for their speed, visuals, power, price and well, everything else.

We think Sony with its PlayStation 5 is trying to improve the quality of gaming by introducing immersive features like the DualSense controller whereas Microsoft with its Xbox Series X is trying to establish and widen their ecosystem spectrum by giving amazing features and offers through Xbox Game Pass.

PS5 supports PS4 games with reduced load time and better-quality visuals, which does make it somewhat backwards compatible. Xbox Series X allows the gamer to access and play older titles as well. Games from every Xbox generation- Xbox 360 and more, can be played on this new console. This clearly gives Xbox the upper hand when it comes to grabbing gamer’s attention.

The difference between the two in terms of games is the exclusivity they are offering. PS5 has introduced a lot of PS5 exclusives like the Astro’s Playroom, Marvel’s Spider-Man: Miles Morales, Sackboy’s Big Adventure, Demon’s Soul and so much more.

With Microsoft’s Xbox Series X, you can always go down memory lane and play all your favourites no matter what year they were launched in the market. Apart from this, they have also introduced 30 games that are very specially optimized for Xbox Series S and X, and trust us even though not all games are new, the optimization makes the games even cooler.

Well, both the consoles are equipped with epic game titles like Assassin’s Creed, Call of Duty: Black Ops Cold War, Cyberpunk 2077 and so much more coming.

PS5 during its launch claimed that the new console will reduce the loading time of a lot of games as compared to the previous version of the console- PS4. True to its words, the game loading time has reduced significantly.

Taking about the animation transitions, frame rates fluidity etc, both the consoles are at par with each other. However, we think the Xbox Series X’s ray tracing is a bit richer than that of the PS5’s. Xbox’s shadow and lighting projection are unmatchable.

The new PS5 is a lot more towering and asymmetrical than its last instalments. The vertical to the horizontal configuration can be a bit too much more for many people. However, on the brighter side, it comes with a USB-C port which is very essential as accessories these days come with USB-C cables attached.

The New Xbox Series X is a much sleeker console as compared to the PS5. When Vertical it looks like a tower PC and manages its space very effectively.

The next-gen consoles were expected to come with astonishing features and specs. And let us tell you, neither of the consoles has disappointed.

Resolution: Up to 8K

Resolution: Up to 8K

A complete departure to the DualShock 4, the new PS5 DualSense comes with bigger grips and a plethora of impressive new features. Some of the astonishing new features that this cool remote controller possess is improved haptic feedback, built-in-mic, great triggers and so much more. PS5’s new controllers definitely give us a look into the future.

When it came to the controllers, Xbox decided to play it safe, which we think was quite smart. It is almost the same as the iconic Xbox One controller which became a sensation when it was first launched and was dubbed as one of the best controllers ever made. The new controller has some amazing updates of its own including- the improved D-pad, textured grips, a share button in the middle and the shoulder buttons. However, the fact that it still needs AA batteries is a bit off-putting.

Here in the battle of controllers of PS5 vs Xbox Series X, PS5 wins beautifully.

Both the consoles have made a clear market for themselves since their arrival. The new updates, the new games and their performance that seems to be getting better and better as time goes by have added to the ongoing dilemma of gamers as to which console to buy first. In the battle of  PS5 vs Xbox Series X,  PS5 seems to be dominating the minds of Indian gamers at the moment. why you may think? Well, follow us to know the answer.

Also, if you haven’t already bought a PS5 or Xbox Series X, we hope our article will help you make a decision. To buy the same visit our website HG World today! See you there!

All about Microsoft Xbox series x