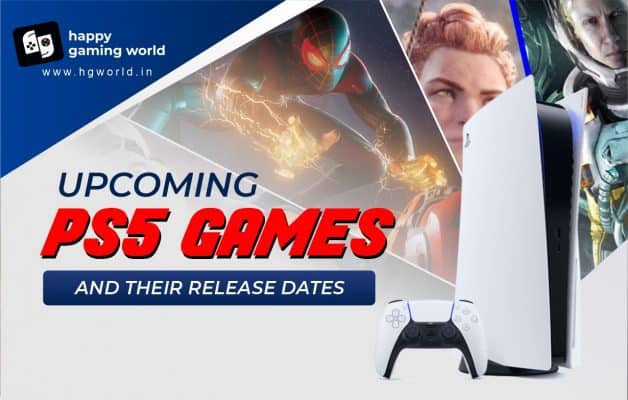 Sony launched its next generation console last year and it’s been a party since then. Even
though there are already a lot of games to enjoy, many more are on their way to blow up your
mind and expectations with their uniqueness.
There is something for everyone on the list of upcoming PS5 games. From adventurous horror
survivals to much-awaited sequels to raw and original indies, there is surely a lot to look forward
to. We have compiled a list of some of our favourite upcoming PS5 games along with their
release dates to put up countdown timers too.

1. Rider’s Republic
Release date: September 2, 2021
Now this will make your weekends with your game buddies epic. Developed by Unisoft Annecy,
this game allows the player to ski, bike, snowboard or even try on flying wingsuits. This game
can be played by 50 players together on a single map at a given point in time. What’s more?
Well, activities, fun events, viewpoints and so much more to discover. Just like we said, a
perfect way to have fun with your friends.

2. Marvel’s Guardian of the Galaxy
Release date: October 26, 2021
This Upcoming PS5 game is one is for the MCU fans. Developed by Eidos Montreal and
published by Square Enix, this game follows the original group of misfits that consists of Rocket
Racoon, Gamora, Drax the destroyer and Groot, on an amazing adventure all through the
universe. The player will play as the Star load who is the captain of the team. The decisions and
choices that the player makes during the battles as well as throughout the game will lead it
further accordingly. What you will not miss is the playful banter, colourful conversations and the
team spirit these characters originally possess.

3. Little Devil Inside
Release Date: July 2021
One of the most hyped up upcoming PS5 games in 2021, Little Devil Inside is waited for all the
right reasons. This action-adventure role-playing game is inspired by the 19th-century era and
follows explores on their conquests to search for the monsters and other supernatural events.

What makes this game even more amazing is that it features several elements like survival,
open-world exploration as well as combat together. The player has opportunities to explore
deserts, mountains, snow, deep seas and so much more. Overall this game is packed with
everything adventurous and amazing.

4. Kena: Bridge of Spirits
Release Date: August 24, 2021
Developed and published by Ember Lab, Kena: Bridge of Spirits is an upcoming action and
adventure game. The background of the game is heavily inspired by the beautiful locations of
Japan and Bali. The game revolves around a young girl named Kena who helps the deceased
individuals move from this world to the spirit world. The player is third-person and used Kena’s
staff and pulse ability to attack and defend against enemies. The game also includes tasks like
collecting spirit companions that will help complete missions and win battles against various
enemies. So, get ready for an epic adventurous game to satiate the adventurer within you.

5. House of Ashes:
Release Date: October 22, 2021
The third in the total of eight planned instalments in the much famed The Dark Pictures
anthology, House of Ashes is developed by the Supermassive Games. It comes after the Man
of Medan that was launched in 2019 and Little Hope in 2020. It is categorised as an interactive
horror survival drama game. The storyline involves five characters getting trapped underground
beneath a Mesopotamian temple during the Iraq War of 2003. The problem arises when
monsters awoken by all the chaos, try to hunt these characters down. The player can control all
these characters and take decisions that will have long-term effects on the game. The video
game is also said to have multiple endings.

6. Tom Clancey’s Rainbow Six Extraction:
Release Date: September 16, 2021
This tactical shooting video game is a spin-off of the 2015 Rainbow of Siege. Tom Clancey’s
Rainbow Six Extraction is developed by Ubisoft Montreal and published by Ubisoft. This is a
multiplayer type of game that requires the cooperation of up to three players at a time to play
and pass the challenges. All the players need to work and fight in unison to defeat alien-like
monsters known as the Archaeans. The game revolves around the players infiltrating the aliens

base and carrying out missions and tasks like collecting data, intel, material, samples and much
more. Get your best friends to have one of the coolest gaming experiences with this game.

7. Life is Strange: True Colours
Release Date: September 10, 2021
Fifth in the Life is Strange series and third, in the mainline game, true colours are a game to
look out for. Developed by Deck Nine and published by Square Enix, True Colours graphic
adventure game that revolves around a young woman named Alex Chen, who goes on an
adventure as she tries to uncover the mystery behind her brother’s death. Alex also can
experience and feel other’s emotions. This third view game helps Alex use her power better to
unveil the true emotions and motives of people. This game, its characters and the storyline are
assured to give you a lot to think about for a very long period.

These upcoming PS5 games have made every gamer’s 2021 more enjoyable and
adventurous with the launch of so many quality games. Most of these games can be played on
more than just one platform. So, what are you waiting for? Go ahead and pre-order or place
these epic games in your Wishlist, so you don’t miss out on the fun.
Shop your next gaming product and accessory with us at HG World to redeem incredible offers
and discounts on our website. We have the most amazing check and buy a policy that is sure to
woo your mind. Apart from that, we are also pioneers of easy returns. So, what are you waiting
for? Go look for yourself today!