8 gameplay tips to turn you into an expert esports player 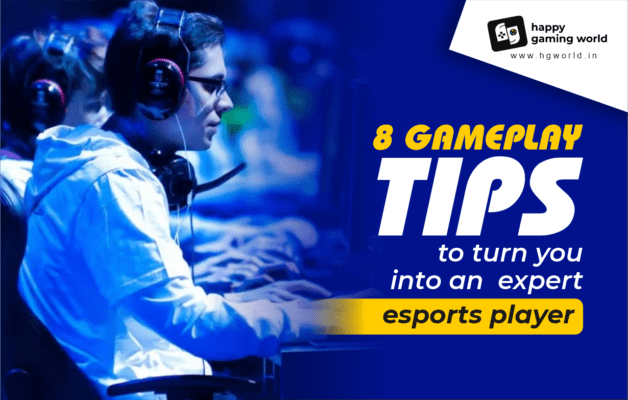 If you dream about becoming a professional gamer, winning accolades and prizes, you are at the right place. However, staying at home in shorts and spending an insane amount of your time trying out several games and screaming at the screen for not clearing the level, isn’t exactly going to place you on the gaming throne.

Along with practising, there are several gameplay tricks and game tips that will ensure your place in the gaming world.

Here is a compilation of several game tips to get you started and turn you into an expert esports player:

The very first strategy here is to find the game that interests you the most. We do not advise you to dabble between several games. You need to focus and practise that game relentlessly and aim to become a professional of the same

In the gaming world, especially where money is involved, you are expected to compete in a game and win title and tournaments of the same. To achieve this you need to be better at a game that you are more skilled in as compared to others and stick with it.

Several games like Call of Duty, PUBG, FIFA and more have international tournaments that serve as an incredible opportunity for all the aspiring gamers that are waiting to smash competitions and win titles. Hours of gaming, practice and a lot of dedication are the perfect game tips to give you a boost.

This is to be considered while choosing the game of your choice. If you are more into console gaming as compared to PC gaming, then go for it. Choose a game among the various console games. You may know that the majority of the international gaming competitions are more focused on PC gaming but the gaming industry is diversifying at an astonishing pace and more and more mediums are getting involved in the gaming scene. After seeing PlayStation’s success with FIFA tournaments, gaming legend companies like Microsoft and Nintendo are also getting into a fighting stance, quite literally.

You may have heard about players playing fighting games one day and then racing the other day. This is not common among professional gamers as the pros tend to stick with one game and then master it to compete on an international level. Due to this, you should pick a genre for which you are genuinely interested and have natural skills. Once you have decided on the game you wish to master, get to practising the same.

Now that you have chosen your game, you have to dedicate not only efforts but hours and hours to master it. Here, natural skills and talent also add to the overall bonus reaching the top. Don’t give up just because you are unable to finish a level even after playing it several times.

You can watch other pro players play and understand their strategies and tactics. Their way of playing, the set-up they are using or their out of the box thinking to defeat their opponents can draw a lot of inspiration for all your future gameplays. Since they are already masters in the game you are seeking to ace, their tips and tricks will surely help you to fix your gameplay and come up with new game plans of your own.

Along with extensive practising and training in a specific game, you should also research tricks and tips that will strengthen your gameplay. For this try different approaches while playing, read interviews of pro players, watch online tutorials of the game played by several players and many more. It may seem insignificant now but it will surely add to your gaming skill when you are competing at a higher level.

Many others wish to reach the same place as you. Each one of them has a different skill set. Not only that but their way of thinking also differs, which could benefit both of you. Network and invite them to practise with you. This will help you to pick up on all the small details that your future opponents may possess.

Try to invest in the best gaming gear and set there is. This will definitely add an exclusive edge to your gaming. Good gaming gear and the set will make things easier as they are built for this very purpose and highly differ from the average accessories available in the market. This will make your gaming sessions more enjoyable and smoother.

Believe us,  becoming a pro gamer isn’t impossible. It definitely is within your reach only if you highly motivated and dedicated to becoming the best of the best in the game you wish to ace. The above game tips and tricks will give you a boost in your gaming career.

We at HG World are aimed to mainstream the gaming industry in India. We have a fine collection of gaming consoles, television sets, gaming accessories and many more at amazing and discounted price to help you with your gaming journey. Check us out today!

How to choose the best gaming controller

How to maintain your video game systems and consoles?

Know the PS5 Tips and Tricks