India’s Top E-sport players and how much do they earn? 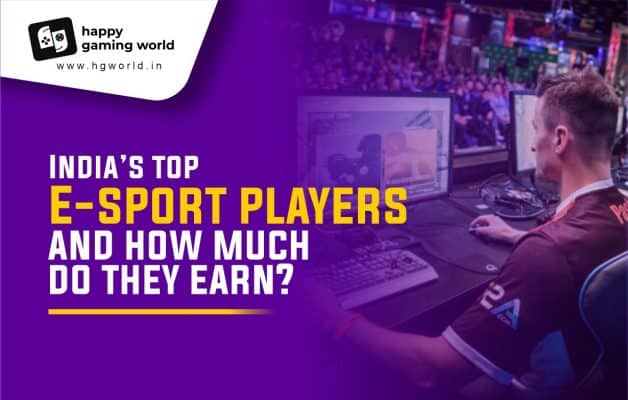 Let us know about the top Indian Esport players and how much they earn. One industry that was positively affected by the Global Lockdown and pandemic was no doubt the gaming industry. With nowhere to go and a lack of physical activities, people turned their attention to several OTT platforms as a source of entertainment.

However, they missed the adrenaline rush and excitement that came from indulging themselves in adventurous activities or sports. So, games came to their rescue. This proved to be a breakthrough moment for the gaming industry with companies, brands, developers, and gamers, equally contributing their time, money, and efforts towards the expansion of the same.

This sudden and massive boost affected the E-sport business and finally helped it establish its roots in India. More and more gamers began to curiously shift their attention from online gaming to know more about esports. Now, a lot of you may confuse the two- Gaming and e-sports.

Let us clear the two out first. Gaming is playing your favourite game without the intent of earning any prize in the form of money, title and so on. Whereas, Esports just like your traditional sports is playing video games on a competitive level with the intention of winning something and that something can be anything from money, title, rank and so on.

Esports is very similar to traditional sports where players have to undergo rigorous training and shape down their lifestyle to bring positive results to their game. In esports as well, the players have to practise and perfect their form by following a certain lifestyle that will positively affect their performance in the upcoming esport tournaments or events. For more details on the difference between esports and gaming, click here.

Here is a list of Indian E-sport players with the highest recorded earnings:

This youngster from the Indian town of Bhuj in Gujarat has already made our nation proud by winning a bronze in Hearthstone at the Asian 2018 event of Esport demonstration.

The game he won required the Indian esport player to possess advanced knowledge on both chess and poker.

This champion has regularly been participating in matches, games and tournaments to keep his skills sharpened and give him an edge in the next game.

Like every other kid, Moinuddin’s interest in gaming started young around the age of 12. He started playing games as a fun timepass but soon he realised he can easily excel and make this a career. He started competing in games and tournaments bringing in laurels and medals. Soon enough, his achievement list looked like something straight out of some fantasy novel with him being two times national champion, representing India in a lot of international events and tournaments, runner up at PES 2017 tournament and many more.

To know more about such Indian esport players click here.

Talking about Esport players in India and their earnings, we can say that more and more Indians are talking about esport in a new light. Even though it is not something Indian parents would accept and associate their kid’s future career with, there is a lot of hope flowing in. With the expansion of the gaming industry as a whole in the nation, Esports is bound to get mainstreamed sooner than later.

Until then, buy and play all your favourite games with us. We provide gaming accessories, consoles, video games and so much more at amazing prices and discounts. Visit us today!

Sony Play comes with the idea of AI technology