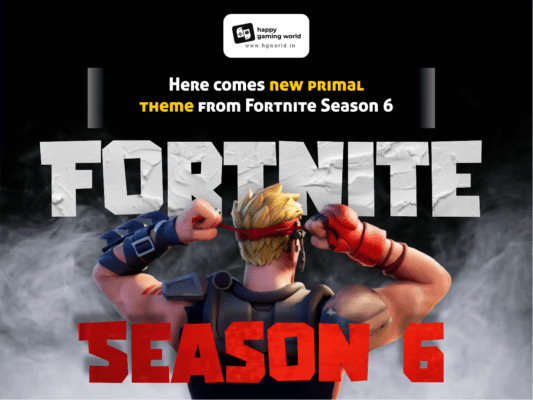 Fortnite is one of the most beloved games that can be played on different platforms such as Playstation, Xbox, and high-end gaming Pcs. Season 6 of Fortnite was released on 16th March 2021. To have a continuation with the zero crisis finale where the season ended with the introduction of ancient and prehistoric biome islands. Primal is the name given to the theme of Fortnite season 6.

Let’s begin with this blog to know more about the new primal theme and updates of season 6.

Users playing for the first time will be welcomed with a short cinematic video starring our main character Agent Jonsey. The whole video game moves around our character and his attempts to save reality. The character is spitted out to an island with the tower of Spire at its centre. The location of the tower is the same as that of the zero point explosion from season 5.

The primal theme includes a new and improved crafting mechanism that allows the players to upgrade their weapons using raw materials from the orthodox island. The inventory of weapons includes bows and arrows, upgraded rifles, revolvers, and flames. On the other hand, players will find multi wildlife moving around the island from hunters such as dire wolves and wild boars to harmless animals. Users will also be able to tame the deadly hunters, or hunt them down for raw material and upgrade their inventory. Epic games say some more deadly beasts are yet to hatch. The tower of Spire is located at the centre of the island surrounded by villages replacing the alien desert from season 5. The whole island is covered with primal biome colossal crops and boney burbs can be discovered all over the island. On the edges of the island under the safeguard of mysterious forces, there live guardian spires.

To continue the trends of characters and skins of season 5. Fortnite’s battle pass holders will have access to action hero characters such as Lara croft and famous Brazillian footballer Neymar Jr. Alongside, there will be skins for the main characters of the games Agent Jones, and others. The skins are available only for the battle pass holders.

Rocket launchers will be available in the bunker crates to the players across the island. Epic games talk about the release of new and mysterious weapons, the strength of these weapons is not overpowered. These are unconfirmed news and might be available in future updates.

This is an excellent announcement that made Fortnite fans happy by the return of pump shotgun which was eliminated in season 5. The whole story of the game is based on time travel to an island covered with primal biome. The island has ancient animals and upgrades the traditional weapons using prehistoric materials.

HGWorld is one of the best when it comes to resources related to gaming. We provide verified and trust gaming consoles and games to our customers. We have all the gaming accessories to unleash the gamer within you. Visit our website to buy consoles, games, or subscriptions for your gaming needs.