Add these trending Nintendo games to your cart 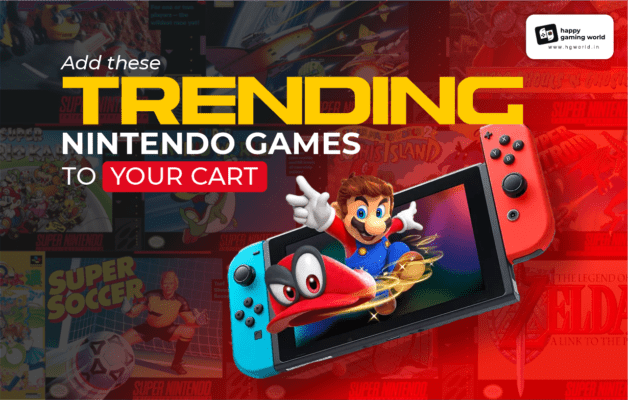 Nintendo is a company known for its strong and reliable brand name. It has a history of setting the bar high for itself every time they introduce a new game. Over the day they have successfully introduced and launched astonishing games that went on to become legends in gaming history. The new Nintendo games launched in previous years are a living testimonial of the same.

Passion missed with hard work and results together constitutes every Nintendo game ever brought to us. There is no doubt that all the games offered by the gaming magnate are absolutely refreshing and exciting. However, some games rise a bit above the rest.

Here is a curated list of these legendary trending new Nintendo games that you need to add to your cart asap.

From the super popular gaming series, the Animal Crossing series, this game is the fifth edition in the same. This simulation game was developed and launched in 2020 for all game enthusiasts. The storyline starts with the player moving to a deserted island and then building everything up from the scratch. Tasks, like collecting craft items, rebuilding and updating the island and creating a community, are some of the activities the players indulge in.

The sixth in the ever-popular Mario series, this is one of the new Nintendo games that has dominated the hearts of Mario fans since its arrival. The replay value with its popular and catchy soundtrack are some of the most alluring features of this game. The presentation and level designing are other bonus features. It is also the second best-selling gaming console for Nintendo. It has been recorded that the super popular game has sold over 5.5 million copies in the Switch version.

This puzzle horror adventure game is well known for all the right reasons. This game is published by Bandai Namco Entertainment. Little nightmares II are the prequel version of the popular game Little nightmare. Developed by Tarsier Studios, the game follows around a new character named Mono who is a small boy with the main protagonist of the sequel, Six.

The game is welcomed with marvellous gameplay designs, sounds and controls for the players to enjoy.

One of the most popular from the Legend of Zelda franchise, the Breath of the World was developed for Switch and the Wii U. Set at the end of the Zelda timeline, this game just like its predecessors allows the player to move and act freely in the exciting world. Little instructions coupled with exorbitant visuals will make you get immersed in the beautiful world. The main character Link is awakened after a hundred-year slumber to save the Hyrule kingdom. Experimentation is the key to gain rewards and missions can be cleared in a non-linear way. Get your hands on the game right now!

Perfect for Greek mythology enthusiasts, Hades has a lot to offer in that context. It is developed by the same developers that created legendary games like the Transistor, Bastion and Pyre. The main protagonist is Zagreus who is the son of Hades, the god of the underworld. The storyline progresses as Zagreus gets into a spat with his father and wishes to leave the underworld.

In doing so he has to complete and pass through various levels and stages of the underworld. In the process, he gets an opportunity to gain favours and boons from the various Greek deities like Ares, Zeus, Athena and many more.

Based on the ever-popular comic series and movie, Scott Pilgrim returned to the players game screen after a six years hiatus. The storyline is the same as that of the original comic series where Scott is in love with Romana Flower and to date her, he has to defeat every single evil ex of hers.

There are a lot of new Nintendo games that you can explore and definitely add to your card. You can search them here.

A lot of the new Nintendo games mentioned above can be played on various platforms like the Xbox, PlayStation or many more. Not owning a Nintendo product shouldn’t stop you from enjoying these adventurous games.

Indulge into the world of gaming. It certainly has a lot to offer. Talking about offering when it comes to gaming accessories and products, HG World is the master that delivers reliability and excellence every single time. Check out our website here to avail the best offers on various gaming consoles and games.