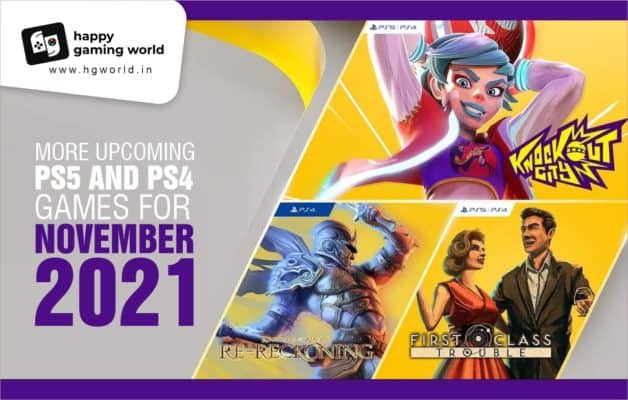 It’s a wrap for the Halloween season! We saw some really cool titles and sequels that accompanied our weekends the past few months. Even with only two months left of 2021, game publishers and developers are in no mood to step down from delivering blasting hits.

Each month is always packed with big projects from major studios and a few indie hits that assures every genre of gamers. Some of the year’s biggest hits are all lined up for the last two months.

Here is our list of the upcoming and latest PS5 games and PS4 games for November 2021.

Developed by Ubisoft, Just Dance is the latest and thirteenth addition to the overall series ‘Just Dance’. Just as the previous instalments, this latest PS5 game is also a motion game that requires the player to mimic the on-screen actor’s steps, pose and follow the instructions given on the screen.

Depending on the system, motion controllers or downloaded application on the smartphone can be used to play this game. The players are ranked according to their performance and accuracy in mirroring the dance. This instalment has over 40 amazing songs from top artists like Taylor Swift, Beyonce, Lady Gaga, Black-Eyed Peas, Imagine Dragons, Sia, Justin Timberlake and so many more. Hits like Judas, Last Friday Night, Levitating and so many more are all included in this groovy game.

This much-awaited thriller has been the talk of the town since its launch in the first week of November. This first-person shooter game is the sequel to Call of Duty: WW2

WWII and the 18th instalment in the overall Call of Duty series. The gameplay features three exclusive modes- multiplayer, campaign and zombie mode. All equally exciting and intriguing on their own. Every mode has its own story and set of characters that sometimes appear over several modes.

Published and developed by the same studio (Frontier Developments), Jurassic World 2 is the sequel to Jurassic World Evolution that was launched in 2018. This newest addition is set after the events of Jurassic World: Fallen Kingdoms. This game is a construction and management simulator that is perfect to challenge the creator in you.

The player needs to construct a Jurassic Park for public viewing. That includes building enclosures for the pre-historic species, amenities like restaurants, toilets, sources of entertainment like rides and hiring professionals like scientists, veterinarians among other faculty to keep the animals and park going with their research and service.

The game is highly advanced and designed to level up its predecessors.

Developed by Bethesda Game Studios and published by Bethesda Softworks, The Elder Scrolls 5: Skyrim is back with its Anniversary Edition.

Even though the mentioned game has many versions including the Special Edition available for the players, what sets this newest addition apart are all the changes, enhancements and so much more.

The new changes include added quests, spells, locations and items all to make the game even more exciting.

Far Cry 6- Vaas: Insanity brings forward the perfect opportunity to experience the twisted mind of one of the most infamous antagonists of the series, Vaas Montenegro from Far Cry 3. The game represents his twisted mind and his attempt to escape it.

The game renders Vaas fully weakened especially without his money or any weapons. However, as the game progresses one can unlock various traits in Vaas that may help in surviving the extreme challenges of the game. As this game is especially focused on the enigmatic villain, the player will also get the best opportunity to dive into his past and experiences understanding his demons and challenges he faces with himself.

The series has three episodes in total with Vaas: Insanity being the first. The remaining two episodes also feature legendary villains from the Far Cry series- Pagan Min and Joseph Seed from Far Cry 4 and 5 respectively.

A much-awaited spin-off of the epic Leagues of Legends is all set to finally available for the players to experience in November. Developed by Airship Syndicate and published by Riot Games, this game was officially revealed during the League of Legends 10th anniversary in 2019.

This role-playing game gives an amazing opportunity for all the hardcore League of Legends fans to rediscover and explore the familiar settings of the epic game and the World of Runeterra. The game is a perfect mix of an intriguing storyline, mesmerising art, legendary characters and creative combat opportunities.

The game follows after the events of the Burning Tides. Players can choose between the various champions like Ahri, Braum, Miss Fortune, Yasuo and so many more. Get ready to explore the bustling pirate city of Bilgewater and the misty and dark Shadow Isles.

The player can choose and control between any four battle specialists- Recon, Assault, Medic and Engineer. Every specialist has its own peculiarity and special traits that affect their overall performance in the game. They can wield any unlocked weapon and gadget. As the storyline of the game is set shortly, the player has the opportunity to experience futuristic weapons and gadgets. Features like instant location weapon drop in and instant customisation of the weapons makes playing the game even more worthwhile.

Straight from the Rebellion Development studios, Evil Genius 2: World Domination is the sequel to the 2004 hit, Evil Genius.

The latest instalment is already available on Microsoft Windows and is all geared up to launch on several more platforms including the PS5, Xbox One, Xbox Series S and Xbox Series X. The game can be categorised as a real-time simulation and strategy game that tests your decision and management skills in a very fun and amusing way.

The main quest of the overall game is to expand your evil network all the while creating a mass destruction weapon that will help you take over the world and make the Forces of Justice surrender in defeat. The game consists of various missions, challenges, side stories and so much more that are sure to bring out the evil genius in you.

Watch the video of ps5 here.