How big do you think the gaming world is? 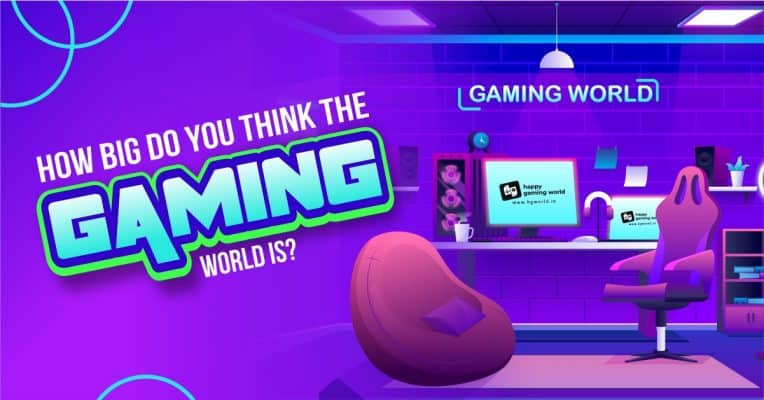 The gaming world or most popularly known as the video game industry involves the marketing, building, developing and monetization of various video games on a global scale. Gone are the days when the gaming industry only meant playing games through your computer in your bedrooms and at your local cybercafes. Well, if you are new to the gaming world, let us introduce you to a whole new world full of exciting adventures literally.

Over the past few decades with big companies like Sony, Microsoft and many others coupled with new technology and the internet have pushed the gaming industry from just focused markets to the global mainstream market.

Gamers enjoy video games on various mediums like their personal computers, arcades, gaming consoles like the PS5 or Xbox, handheld gaming devices like the Nintendo Switch, Mobile phones and many more. Earlier, it was majorly focused on consoles, PCs and Arcade gaming. However, the introduction of better smartphones at a lower price, high-speed internet and the lockdown caused by the pandemic has set records like never before. The gaming world blew in 2020, with mobile gaming sweeping the most revenue in the entire market.

To give you an idea of how big the industry has grown here are a few statistics.

History of video games and the gaming industry

From being a niche industry in the global market to being a robust and dynamic sector, the gaming industry has seen it all. Over the decades it has achieved unfathomable records and achievements. Gone are the days when gaming was only considered as a source of entertainment for children or as a way to keep them busy. The industry today generates billions in revenue as mentioned above and employs a majority of people all across the world.

The 1960s marked the start of building video game prototypes mostly in labs. However, Atari’s Pong released in 1972 changed the game forever. They started selling their home console version of the same game from 1977 and became the first console to cross the million mark commercially.

Then games like Space Invaders, Pac-man and Donkey Kong, all started spreading and selling off the shelves in no time. By 1982, arcades took over as the most popular source of entertainment.

At this point, every gaming company in the industry rushed to capitalize the market. Even Atari rushed to do so resulting in the decline in the gaming quality and overall poor delivery. This led the gaming market to a whole new level of slump. However, this was also the time when Nintendo went on to launch the NES (Nintendo Entertainment System) in 1985 that forever left its mark with games like Super Mario Bros and many others.

PlayStation also launched its first ever console in 1994 and became the first console to sell more than 100 million units.

This was the period when mobile and the internet took the gaming business to another level. Microsoft launched live subscription services known as the Xbox Live. This led subscribers to multiplayer matchmaking and online chat facilities for a nominal fee.

Advancing the PC games, Blizzard introduced and captured the market in 2004 with World of Wizard.

Nintendo continued its dominance with an updated version of the hand-held Game Boys. While mobile brands like the Blackberry and Nokia focused on prioritizing mobile gaming in their phones.

Iphone’s introduction of its very own app store followed closely by Google’s Play Store opened a whole new world for game developers and creators to make and introduce new paid and unpaid games for mobile users.

The gaming world has boomed in recent years due to the digitalisation of games that helps in reducing the cost that is incurred in traditional distribution of these games. Other factors too have contributed to the growth of the industry.

We at HG World have always supported the gaming world by helping mainstream gaming. Our online store has everything to satiate your gaming hunger. Gaming consoles, Hand-held gaming devices, games, gaming accessories and many more to choose from. What are you waiting for? Go and check us out today!