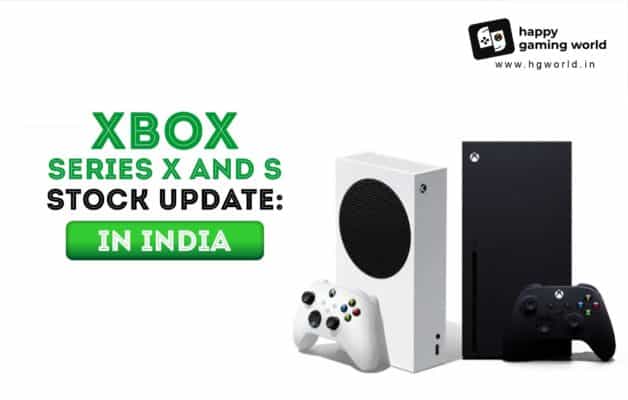 Finally, the wait is over! The most in-demand Xbox Series X and S by Microsoft are about to get restocked! Ever since the stock out of Xbox X series and S series Microsoft has been striving to restock these series for the Indian Gamers. According to the sources, Microsoft is all set to restore the next-generation consoles.

But the sad part of it is that the restock will be restricted to limited quantities. So if you aren’t quick to seize the deal you might lose this chance to grab your X and S series. There is a tremendous desire for these brand-new series amongst the gaming geeks in the country as Microsoft has not been able to restock the series for the last 3 months!

Microsoft’s next-generation releases are no different when it comes to delivering drastic modifications for console gaming. All thanks to the inbuilt aid for naturalistic lighting technology and sturdy graphics hardware. Also, the 120 fps frame rates and quick solid-state storage support makes the game even more responsive.

The games on both consoles are faster to load than ever. The inclusion of solid-state storage is one of the magnificent advancements by Microsoft when compared to the old generation’s mechanical drive. Microsoft’s span-new consoles provide you with far more independence when it comes to understanding the gameplay of the new games. However, the experience may vary depending on what device you are playing on.

When compared to Series S or the older Xbox generations, the Xbox X Series stands out! Its magnificent sturdy device truly has a huge impact on the performance of the game. On the other hand, the Xbox series S was the best-selling gaming console in March and April in India.

When Can you expect the release of the Xbox X Series and S Series?

So the Xbox X series will be accessible online at least at the earliest in October. Xbox X Series seems to be available on various Digital Gaming stores and Prepaid Gaming Cards. However, the date of delivery of this gaming console appears to be around October 30 2021 to November 8 2021.

The Xbox S Series is accessible from the Digital Gaming Stores and on Prepaid Gaming Cards as well. The delivery of this console depends entirely on the online retailer stores.

Where can you grab your Xbox X Series and S Series?

We all are well aware of the scarcity of these consoles in the country. This makes it very difficult to find the Xbox X series and S series accessible from the online stores. However, leave your worries aside cause we at Happy Gaming World got you covered. Whether it be the Xbox X series or the S series, you can get your hands on these consoles at the best deals and quality.

We understand the behind the scenes of purchasing a console! It can be nerve-racking to find that perfect console for the finest deals! However, our gaming experts assure you the best quality products as they are all tested and handpicked by them. With us, at HGworld you can find Xbox next-generation series at the best and cheapest price.

Your fulfilment is our chief goal hence we have a Check and Buy Policy! Where you can pay only after you are fulfilled with the product delivered. We anticipate and believe in offering you a 100% Original and assured product with a three year extended warranty. So if you don’t want to miss this golden chance! Grab your Xbox X series and S series for a reasonable price with the most reliable quality with us at HGWorld!

You were not leaving your cart just like that, right?

Just enter your mobile number below to save your shopping cart for later. And, who knows, maybe we will even send you a sweet discount code :)