All you need to know about the latest gaming consoles 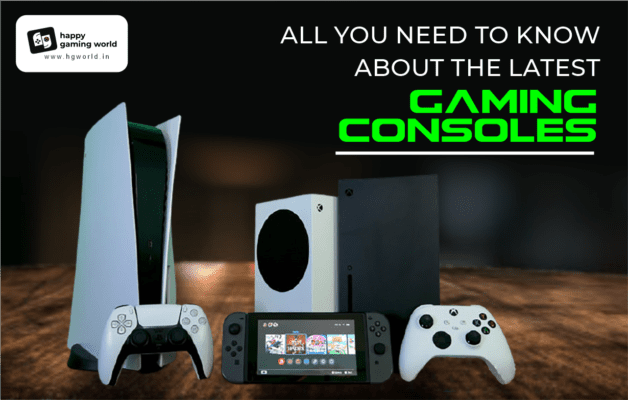 Gaming has significantly changed over the decades and today we have so many exciting options to choose from. From handheld devices to PC games, from online cloud gaming to home console gaming, the gaming world has gone far beyond it.

As fellow gamers, we understand your need to try out new gaming consoles that are marketed to be fun and exciting. However, a lot of times it gets very difficult to decide as to what should we buy? To help you a bit with that decision we are back again with this informative blog on the latest gaming consoles.

Straight from the iconic brand Nintendo’s product line this flexible gaming console is popular for all the right reasons. Today, it stands at par with other competitive brands like the PS5, Xbox One and many more.

What makes this console so worthy to be on the list is the transitioning factor that it possesses. You can very easily convert it into a home gaming console from a mobile gaming device by simply docking the device into its respective station.

The other plus points of buying this amazing console are that it has Joy-Con controllers that are highly innovative. Apart from this the Nintendo Switch also has some iconic games in its ever-growing games library. This console is one of the latest gaming consoles that is a must-have for all the on-the-go gamers.

This mini gaming console is an updated version of the iconic original version. Perfect for nostalgic gamers, this gaming console comes with 42 legendary and iconic games from the 90s decade. Some of the games that are included in the same are Earthworm Jim, Beyond Oasis, Street Fighter 2, Sonic the Hedgehog Spin ball, Castlevania: Bloodlines, Contra: Hard Corps and many more.

In appearance, this version is a replica of the original one from decades ago. However, it is a bit smaller in size.

The console comes with the Sega’s three button controllers that has gone down as being iconic.

Sony launched its latest gaming console the PlayStation 5 last year in 2020. This gaming console is an updated version with the latest features one can offer in a gaming console. The console is capable of delivering a high performance with 4K gameplay up to 120 frames per second. It can also support 8K capabilities.

The memory and storage are all updated from its predecessor. The controllers that feature with this marvellous console are DualSense. That is another brownie point which can convince you to buy the console.

This latest gaming console like its predecessor is capable of VR gaming.

Launched with its competitor in the year 2020, Microsoft’s Xbox Series X is recommended by several reviewers for all the right reasons. This new console is considered as the most powerful console till date by the powerhouse- Microsoft. It has several features like the 4K experience with 120 frames per second. It also supports 8K capabilities. This is all possible due to the powerful hardware it possesses.

The console also has zero loading time for many video games as the console is well-equipped with a GPU that is 12 teraflop and an eight core CPU. Added features include improved memory capacity and increased storage.

The controller is a highly updated one with a share-in button to share your gaming progress and adventures with your gaming buddies.

Launched with the all might Microsoft Xbox Series X, this console is a better option for gamers looking for an affordable alternative of the Series X. It is reviewed to bring almost the same experience as the former leaving a few features out. The console can tackle 1440p gaming at 60fps or 120fps. It has an expandable memory of 512 GB.

All the Xbox Series X games that be effortlessly played on this console. Apart from that, the console also has games of its own that are definitely worth buying it. The series S also gives you an exclusive access to Xbox Game Pass Ultimate that can be accessed with a nominal monthly fee.

These latest gaming consoles are a must-have for all the avid gamers who are constantly looking for new gaming consoles to satiate their gaming urges and go on epic gaming adventures. As mentioned above all the latest gaming consoles described in the above list specialises in their niches and areas of exclusivity. However, it’s you who can decide what suits your gaming the best depending upon various factors.

If you are looking to buy any of the above gaming pieces head over to our website HG World for some epic deals and discounts that are assured to blow your mind. Apart from that, our website also features several blogs and useful resources to help you with your gaming journey. See for yourself today!